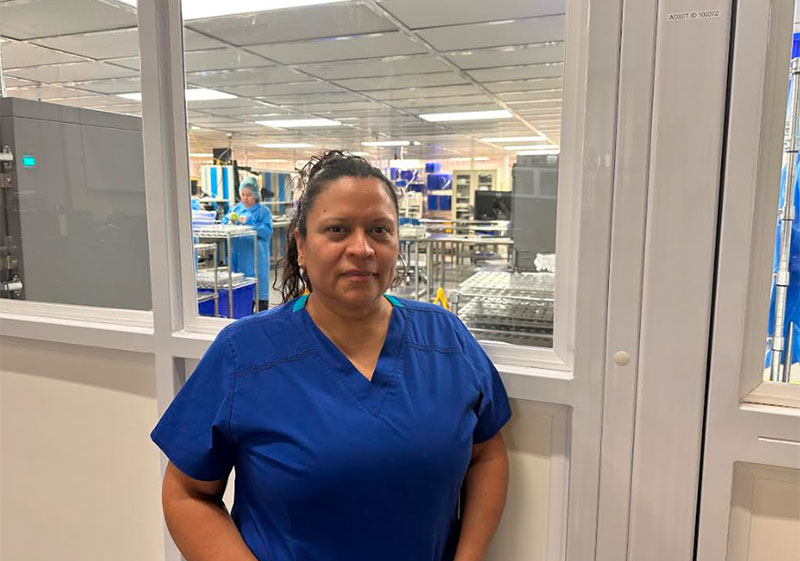 This month, we focus on Guadalupe (Lupe) Pineda, a long-term employee of PRO-TECH Design. She started in California 13 years ago, and when she was ready for a new challenge, she moved with to our Texas facility to help develop the team and culture there. She was one of the first wave of employees in Texas, and over time, she has trained just about every employee who has joined the production team since 2017. As a result, she has had a significant impact on our culture and our ability to train and retain great talent.
And it is a family affair with Lupe and PRO-TECH. Her son, Jonathan, also works at the company, and he too, started in California and moved to Texas, where he now leads production.

When the company realized that Texas would become an important facility and started to attract new customers on its own, company ownership knew that they needed to send a team who they could trust, who had a strong work ethic, and who would thrive in a new environment where they had to create many of their own systems and processes. Both Lupe and Jonathan were perfect candidates. They are very loyal to the company, knew how things worked, and were willing to be groundbreakers to take Texas to a new level. We could not be more pleased with the results of their efforts, as Texas has more than doubled in the last couple of years.

Lupe went to Texas as a production line lead in our cleanroom and then was promoted to second shift supervisor. It was there that she took responsibility for creating and coaching her team. This is where she developed a reputation as an excellent coach and trainer. Her team members know that she has high expectations but is also fair. Over the years, having trained so many people, she can quickly tell who will do well and who might need additional coaching. Her team respects her knowledge, her attention to detail, and her devotion to the success of the company. Lupe is also someone who likes to continually challenge herself by learning new skills and she appreciates that every day at PRO-TECH provides the opportunity to do something different and interesting.

Before PRO-TECH, Lupe sewed bullet proof vests for the police. What a unique job! She also worked in different warehouses and production jobs. All that experience helped her when she applied to PRO-TECH and started off in our sewing division. However, after a few months her skills were quickly recognized and she was “borrowed” by the cleanroom/pack out supervisor, and, strangely, was never returned to the sewing team.

Outside of work, Lupe enjoys cooking, taking long walks, and spending time with family. As we mentioned, family is particularly important to her, and she enjoys not only working with her son, but also being close to her two other children as well.

Thank you, Lupe, for taking the leap with PRO-TECH to move to Texas and bring your expertise and leadership to a new, unknown site. You have helped build the culture there and are a direct contributor to that facility growing into a successful manufacturing site of its own. We could not have done it without great employees like you and Jonathan.
Thanks for all that you do!