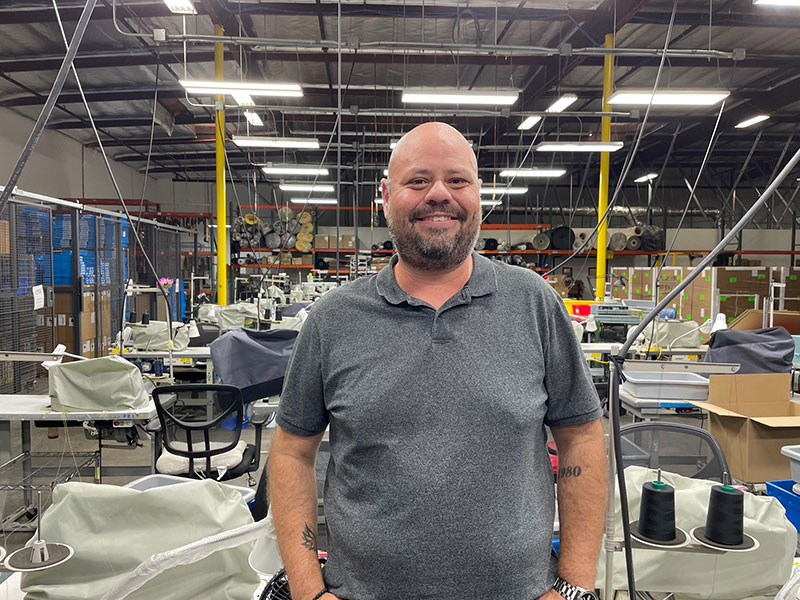 PRO-TECH Design is a leader in Sewn Medical Products for medical devices. We are one of the only ISO 13485 certified sewing companies in the country, and we create custom sewn wearable products to carry, protect, and add comfort to users of medical devices.

It is important to share this background as we introduce our newest Spotlight feature – Jorge Bustamante. Jorge manages the sewing division of the company and has been a terrific addition to the team since he joined nearly two years ago.

Jorge has a fascinating background. He started working in the sewing industry while in high school. His Uncles owned a sewing business and by the time he was twenty-one, he was responsible for managing 100 people! During that time, the business sewed garments for well-known companies like Victoria Secret, Macy’s, and JCPenney’s.

After working for his family, Jorge decided to go out on his own and open a high-end sewing business. His company had a reputation among Hollywood’s biggest stars for delivering high quality gowns under tight deadlines for a reasonable price. As a result, he was in demand to create unique dresses for stars like Oprah and Lady Gaga.

He was then approached to join another fashion company called Swat Fame, where he worked for the next four years. Then COVID hit and the company was forced to shut down. It was then that PRO-TECH Design found him through LinkedIn and recognized what a unique set of skills he had. He had great sewing experience across diverse materials, he had a deep knowledge of different cutting and sewing machines, and he was a natural communicator and leader.

At this point in his career, he was also looking for a change from the fashion industry and was intrigued by the opportunity to join a company whose mission is to help people.

Since joining PRO-TECH, Jorge has made a significant imprint on the sewing division and the company as a whole. His team appreciates his positivity and collaborative leadership style. He truly champions his people and wants them to grow and succeed. He believes his role is to remove obstacles for them to become the best version of themselves.

Outside of work, he met the love of his life, not once, but twice! When he was in his twenties, he dated a woman for three years, but the timing was not right. Seventeen years later, he reconnected with that same woman at a Dodgers’ game, and they are now married!

Speaking of the Dodgers, ask him about LA sports. As a loyal Angelino, he will tell you he is a dedicated fan of the Lakers, Dodgers and UCLA.

Jorge, you have brought such positive energy and we appreciate your collaborative leadership style. Thank you for joining the PRO-TECH family!